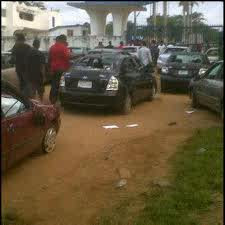 A group of violent youths suspected to be Niger-Delta ex-militants this morning, invaded the Igbinedion University, Okada, Benin City, destroying school's properties and macheting every student in sight.

According to reports reaching us, the said militants invaded school about 5am and they are still there at the time of filing this report.

An eye witness who pleaded anonymity told Vanguard that the violent youths were "destroying cars, macheting people, shooting sporadically and have injured several students while many are feared to have been kidnapped. They have also blocked the main gate of the school so no one can come in or go out

"There's a lot of chaos in the school right now and the students are all scared as the militants have gained access into one of the girls hostel", our source stated.

Effort to know the reason for the invasion has not yielded any success.

Culled from: The Vanguard
Posted by Yimiton at 2:11 PM