Jos Suicide Bomber went into the church disguised as a church member. 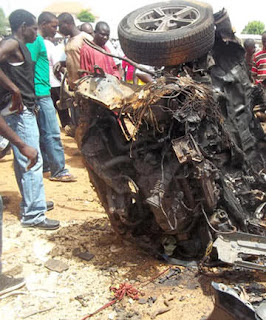 Richard Jonah, a witness at today's bombing of God Chosen Church in Jos, the central Nigerian state of Plateau, said the bomber entered through the church gate after deceiving the security personnel that he was a member coming for service.

Jonah said the suicide bomber, who drove a Volkswagen Golf saloon car, posed as a member of the church and was admitted to the premises by the security personnel.
"But immediately he entered into the premises, he drove straight into the church building and hit the structure with the bomb-laden vehicle while the second service was still going on,'' he said.
The explosion brought down the entire church building, destroying chairs, tables and musical instruments as well as cars and motorcycles.
Officials say the number of casualties in the suicide bomb attack on the church at Rukuba Road, Jos, has not been determined.
However, witnesses said many persons, including the suicide bomber, died.
Mr Manasseh Pampe, a senior official of Red Cross Society in Plateau, said that many of the victims had been taken to various medical centres in the town.
Many severely burnt people and other victims were being rushed to Bingham Teaching Hospital, Jos University Teaching Hospital and Plateau Specialist Hospital, Jos.
Posted by Yimiton at 7:30 PM