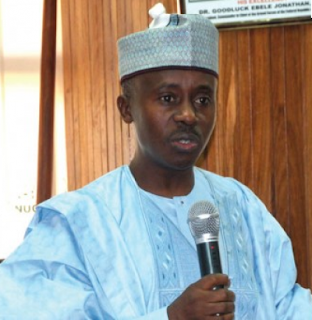 Farouk Lawan, the fiery anti-corruption crusader that headed the House of Representatives committee which probed the fuel subsidy fraud, has found himself under scrutiny following allegations that he accepted bribes to exonerate one of the oil giants involved in the scam.

The leadership of the House of Representatives, on Saturday, gave its full backing to a comprehensive investigation of the allegations that Lawan accepted $600, 000 (about N96 million) to turn a blind eye to the complicity of an unnamed oil company in the fuel subsidy scam.
Media reports allege that the bribe was caught on video by the company officials, and the clip sent to a former head of state, who then forwarded it to the House Speaker Aminu Tambuwal.
In a statement on Saturday, the House spokesperson, Zakari Muhammed, said: "While we await investigation into these weighty accusations, we wish to state without equivocation that this honourable House will never take side with corruption and we will always stand on the side of the rule of law.
The reason we inaugurated the ad-hoc committee to look into the controversial subsidy regime in the first place was to expose corruption in the sector; as such, we cannot, for whatever reason, support any underhand dealing from any quarter."
However, the statement was unclear as to whether an in-house probe would be constituted against Lawan. The House is currently on recess.
"However, these accusations, whatever their merits, do not detract from the quality of the work done by the committee," said Muhammed. "The report of that committee was adopted by the whole House and we stand by the resolutions of the House.
We hope that the executive will not, because of this allegation, abandon its commitment towards bringing to justice, the culprits already in the committee’s report."
When contacted, Lawan said he would soon issue a statement on the allegations
Source
Posted by Yimiton at 10:48 AM