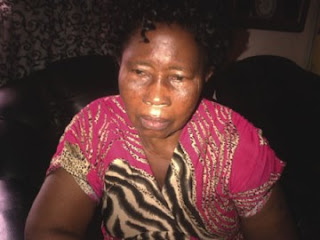 This Mama must have had the scare of her life. Thank God she missed that ill-fated plane. Who says 'Waiting till the 11th hour' is not sometimes a blessing.
Read the story after the cut.
But for providence, Mrs. Ikechi Nwosu, 68, and her daughter, Nkiru Ihezuo would have been among the 153 persons that died last Sunday in the Dana plane crash.

The two women had planned to board the ill-fated plane, but they were beaten to the remaining seats on the flight by two Chinese men who jumped the queue at the Dana airline counter and bought the last minute tickets.
Nwosu told our correspondent in Abuja that she was yet to recover from the shock of the crash, vowing never to take a flight again for the rest of her life.
The grandmother said it was like a dream to her when she heard that the plane crashed and killed all the passengers on board.
She stated that she was very angry when the two Chinese nationals jumped the queue and paid for the seats that her daughter wanted to pay for.
“I felt bad when the two Chinese men jumped the queue and paid for the ticket ahead of my daughter who was trying to bring out money from her bag to pay the cashier. When we missed the tickets, we decided to go back home because I was very angry.
“We postponed the trip although there were no other flights going to Lagos. I am yet to get over the experience, I have been feeling uncomfortable and I have sworn that I will never take flight again; I will rather ride in Keke NAPEP (commercial tricycle) to Lagos, instead of travelling in a plane,” Nwosu stated.”
Source