EFCC arraigns a student for selling his father's house. 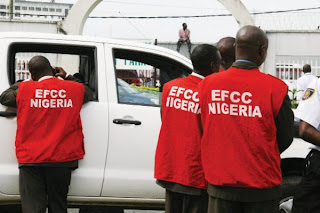 The Economic and Financial Crimes Commission, EFCC, has arraigned an undergraduate of the Federal University of Technology, Yola, before an FCT High Court sitting in Abuja over a N5million scam.


The suspect, Samuel Khanisary was docked before Justice Mudasiru Oniyangi on a three count charge bordering on conspiracy, forgery and obtaining property under false pretence.
One of the counts reads: “That you Samuel Khanisary(M) sometime in March, 2010 in Abuja within the Judicial Division of the High Court of the Federal Capital Territory did fraudulently make a document to wit: “Power of Attorney” dated 9th March, 2010 with the intention of causing it to be believed that the said power of attorney was made by one Engr. Patrick Khanisary, which you knew did not make it and hereby committed an offence punishable under section 364 of the Penal Code Act Cap 532 Laws of the Federation of Nigeria(Abuja)2004.”
The accused person pleaded not guilty to the charge.
His counsel, Festus E. Itua asked the court to admit the accused person to bail, arguing that the charge for which he is standing trial is bailable.
Prosecution counsel, Aso Larry Peters opposed the bail application, stressing that the accused person may not present himself for trial.
Justice Oniyangi, after listening to the argument of counsel on both sides, granted bail to the accused person in the sum of two million naira and one surety in like sum.
He adjourned the case till July 6th, 2012 for hearing.
Khanisary ran into trouble when he sold a two- bedroom flat belonging to his father, Engineer Patrick Khanisary, to one Gidado Ahmad Bello for N5million.
However, the buyer alleged that after making payment for the house, he could not take possession in spite of the fact that he was supposedly given the original title documents and acknowledgement of payment.
Investigations showed that the accused person sold the house in defiance of his father’s instructions to the contrary
Source
Posted by Yimiton at 4:02 PM