2 Brothers sentenced to death by hanging for stealing N39,040 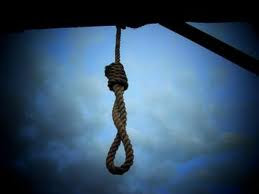 
The two brothers were arraigned for criminal conspiracy and armed robbery.


They were said to have conspired to rob one Simon Tartyough and Isaiah Kena of valuable property.
The property, stolen at gun point, were said to have included cell phones and money to the tune of N39,040 on Makurdi-Guma Road, sometime in March, 2010.
The offences are in contravention of Sections 6(b) and 1(2) and (b) of the Robbery and Firearms Act.
The convicts, however, denied the allegation, testifying for themselves and calling only one witness during the trial.
In his judgement, Hwande said that from the evidence before the court, the prosecution had proved its case beyond all reasonable doubt that the convicts actually committed the offences.
The judge also said that their victims identified them.
After listening to the pleas for mercy on behalf of the convicts by their counsel, Mr R.B. Ayula, the Chief Judge said that though the convicts had no evidence of previous conviction, his hands were tied.
“The provisions of the law is that a convict of armed robbery has no option than a death sentence under the section 1(2) and (b) of the Robbery Act,” he explained.
Hwande said that it was only the legislature that could amend the present law and reduce the sentence to jail terms.
Culled from: PM News
Posted by Yimiton at 8:43 AM