Rumour has it....Lamar Odom set to expose the Kardashian Family secret for $5 million 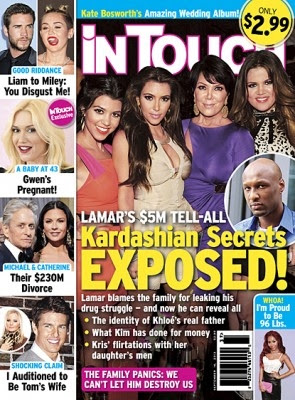 Rumour has it that Lamar Odom is writing a $5 million “tell-all” to expose the Kardashian clan’s “secrets,” blares the cover of In Touch, which claims the NBA star “blames the family for leaking his drug struggle” and now wants to “destroy” them.

A supposed “source” tells the mag Odom thinks Khloe Kardashian’s family is responsible for “all the recent public drama,” alleging that the athlete “believes Kris Jenner and the Kardashians planted all the bad stories about him to make him look like a monster.”

Another “insider” for the tabloid says, “He’s deeply depressed and angry. He wants revenge.”

In Touch goes on to claim that Odom’s “retribution could come in the form of a tell-all book aimed at exposing the Kardashian clan’s darkest secrets.”

A so-called “publishing industry insider” shares, “If Lamar turns on the family, he could get paid a lot of money — the advance alone would be $5 million.”

“He knows everything. It would be one of the juiciest books of the last decade,” adds the “source.”

The magazine goes on to rehash old, wrong rumors about what Odom’s potential tell-all “could” reveal, such as Khloe’s “real father,” Kris’ “infidelity”.

With all the bad publicity surrounding him and damaging his image, Odom is freaking out because he's losing everything and may go after Khloe's sister, Kim.

"Lamar could also expose what Kim's done for money, who she's slept with and the awful things she's said about Kanye West, like how he smells bad in bed and how she's not attracted to him."and more bogus tales.
Of course, not once in the tab’s story does it say that the NBA free agent has any actual plans to write such a book.

In reality, Odom is only concerned with dealing with his own demons at the moment.

Meanwhile, the Kardashians are doing anything they can to help him.

Regardless, inquiries were made and told that “tell-all” story is totally “made up.”

Could there be any truth in this rumor? Only time will tell.