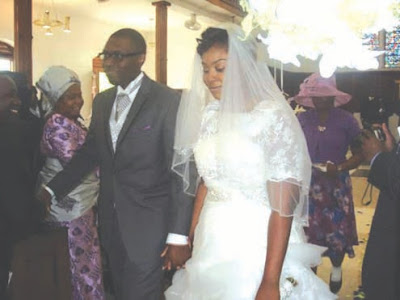 I read about all the controversy following Pastor Kumuy's son's wedding in Jamaica sometime last week. While some bloggers said the lady was all dressed in tight fitting dress and made up, some others  said it was Photoshopped as she was dressed in a shapeless, long sleeve dress without any makeup.

It looks like the people who said the bride was all made up were right because John Kumuyi, the son of the General Superintendent of the Church has been suspended.

John Kumuyi with his wife offered a video apology to the church but his apology was not accepted and he was still suspended.

Read a snipped of the apology after the cut.

“We unreservedly and wholeheartedly state that we did not intend that our acts or omissions will, in any way, undermine the great works that God has done through the Deeper Christian Life Ministry worldwide and more especially, through our Father in the Lord, the General Superintendent.

“We also use this medium to profusely and sincerely apologise to the General Superintendent for the embarrassment and heartaches our actions have caused him, more so that he had earlier declined to be at the events.”

Pastor Philip Olowu, during the programme, said the church overseer had expressed his displeasure with the “standard” of the wedding.

In the video, Olowu said after a thorough accessment of the wedding, the church had decided “to place John and his wife on discipline.”