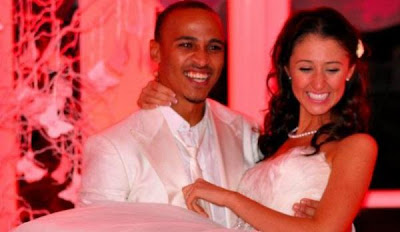 I don't get how another human being can be responsible for an adult's behaviour but that's what Osaze's family and friends seem to believe.

Read the story after the cut.
Embattled Nigeria Super Eagles and Wesbrom Striker Osaze Odemwingie is having troubles in his marriage over allegations his family and some friends are of the conviction marriage is having an adverse effect on his football career.

Since Odemwingie married Sarah Fallon on 26 May 2012 after two years of dating, he has embraced a behavioral pattern that has transformed his once blossoming career downhill.

He engaged authorities of the nation’s football governing body- Nigerian Football Federation and national team coach in a manner that attracted wide spread condemnation and got him sidelined.

The former Locomotiv Moscow star went on to engage club authorities in similar manner, to the extent of single handedly trying to switch to another club. The move earned him wide spread jeers and ridicule. It also forced him out of team play and reduced him to the status of ‘training material’

Information made available to reporters revealed promoters of the campaign ‘marriage is having an adverse effect on him’ have totaled all the incidents and believe there is something about the matrimony making him to behave out of line.

They have however proffered a solution- Osaze should have a rethink about his marriage or at least take a temporary break from the union.

The talented footballer is increasingly under intense pressure to take a break in his marriage and this, investigations revealed his affecting his union, however the Westbrom star remains unshaken in his commitment to his wife and marital vows.

Before he embraced the downward spiral after his marriage – Odemwingie was a darling of football fans both in his country and at his club.