NO, Kanye West is NOT “Set to Dump” Pregnant Kim Kardashian! 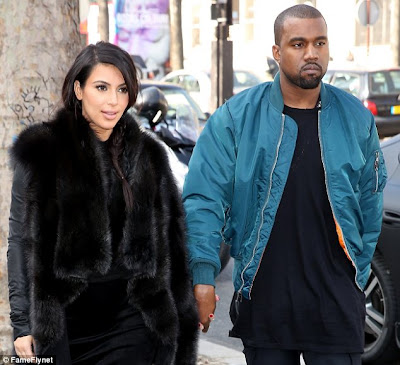 MediaTakeOut made announced that it got word this morning that KimYe will be splitting soon.

The blog, which has falsely reported West was ditching Kardashian numerous times since they became a couple, now claims the rapper has “moved to Europe… to get away from her!!!”

A supposed “source” for the site alleges that West has been trying to “distance himself” from his pregnant girlfriend, noting, “Kanye was coming to Abu Dhabi for a concert and Kim wanted to come with him cause she loves that place. Kanye didn’t allow her because he said it was dangerous for her to travel while pregnant.”
The purported “insider” adds that the “real reason” West didn’t invite Kardashian on the trip is that his friends are advising him to “show up less with Kim, because she’s always a bad look for his image.”

MediaFakeOut, which West has publicly slammed as “so f**kin’ full of sh*t,” further claims that the singer is “moving to Paris for the next two months” to finish his album.

He’s allegedly told Kardashian to stay in Los Angeles to “give him space” until he “sorts things out,” says the so-called “source.”

So we’re supposed to believe that West, who excitedly announced Kardashian’s pregnancy at his concert in December and just purchased an $11 million mansion in Bel Air with her, is now ditching his girlfriend because he needs “space”?

Still, I checked out this story and I can say, the blog’s story is laughably FALSE.