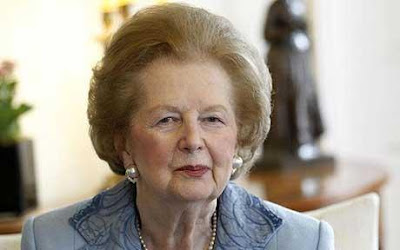 Culled from The telegraph
Baroness Thatcher, Britain's greatest post-war prime minister, has died at the age of 87 after suffering a stroke, her family has announced.

Her son, Sir Mark, and daughter Carol confirmed that she died this morning.

Lord Bell, her spokesman, said: "It is with great sadness that Mark and Carol Thatcher announced that their mother Baroness Thatcher died peacefully following a stroke this morning.A further statement will be made later."

Known as the Iron Lady, Margaret Thatcher governed Britain from 1979 to 1990.

She will go down in history not only as Britain's first female prime minister, but as the woman who transformed Britain's economy in addition to being a formidable rival on the international stage.

Lady Thatcher was the only British prime minister to leave behind a set of ideas about the role of the state which other leaders and nations strove to copy and apply.

May her soul rest in peace.
Posted by Yimiton at 1:23 PM