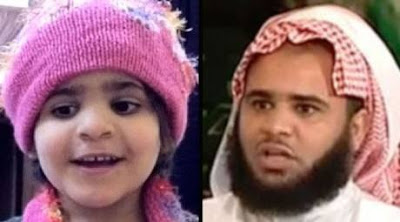 A "celebrity" Saudi preacher accused of raping, torturing and killing his five-year-old daughter has reportedly been released from custody after agreeing to pay "blood money".

Fayhan al-Ghamdi had been accused of killing his daughter Lama, who suffered multiple injuries including a crushed skull, broken back, broken ribs, a broken left arm and extensive bruising and burns. Social workers say she had also been repeatedly raped and burnt.

Fayhan al-Ghamdi admitted using a cane and cables to inflict the injuries after doubting his five-year-old daughter’s virginity and taking her to a doctor, according to the campaign group Women to Drive.

Rather than getting the death penalty or receiving a long prison sentence for the crime, Fayhan al-Ghamdi served only a few months in jail before a judge ruled the prosecution could only seek "blood money".

Albawaba News reported the judge as saying: "Blood money and the time the defendant had served in prison since Lama's death suffices as punishment."

Fayhan al-Ghamdi, who regularly appears on television in Saudi Arabia, is said to have agreed to pay
$46,934 to Lama’s mother.

The money is considered compensation under Islamic law, although it is only half the amount that would have been paid had Lama been a boy.

Despite Saudi Arabia’s famously strict legal system, Women to Drive say fathers cannot be executed for murdering their children in the country.

Equally, husbands cannot be executed for murdering their wives.

Formal objections to the ruling have been raised by three Saudi activists, and the twitter hashtag #AnaLama (which translates as I Am Lama) has been set up.

Local reports say public anger over the settlement is growing across Saudi Arabia, with authorities planning to set up a 24-hour hotline to take calls about child abuse.
Posted by Yimiton at 6:33 PM