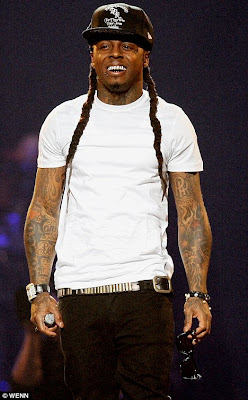 Lil Wayne tweeted to say he is 'good' despite it being said he was dying and being read his last rights.

TMZ had reported the rapper was on his death bed with friends and family saying their last goodbyes to the star.

I'm fine: Lil Wayne tweeted he was alright on Friday despite once again being hospitalized after suffering from seizures

While he was said to be on 'life support' and in a critical condition after suffering from uncontrollable seizures he tweeted to fans late Friday saying he was alright.

He wrote: 'I'm good everybody. Thx for the prayers and love.'

Friends still packed the waiting room of the hospital on Friday night including rapper Drake.

TMZ reported: 'Sources say there's evidence Wayne went on a Sizzurp binge after being released Wednesday, because doctors found high amounts of codeine in his system.' But after being taken to a local Texan hospital, a spokesman for the rapper insisted he was only treated for a severe migraine and dehydration.
Posted by Yimiton at 5:06 PM