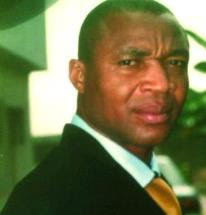 Eze Okoro, a 46-year-old man in Lagos was allegedly shot dead by drunk Nigerian Police officers recently in front of his house at 1, Oguntolu Street, Ijaiye, Ojokoro area, Lagos State, southwest Nigeria.
But the police have denied taking part in his murder.

The policemen had been drinking for about six hours at a hotel nearby before they gunned down the man while he was enjoying evening breeze in front of his house after work.

After shattering his waist with bullets, the policemen who were said to have come from the Special Anti-Robbery Squad, SARS, Ikeja, forcefully took his corpse away, perhaps to cover up their heinous act. and dumped it in a mortuary at Yaba.

The policemen took him to Yaba after the Ikeja mortuary officials insisted that before his body could be deposited there, they must fill certain forms, which they refused.