Oscar Pistorius recount of how he shot his model girlfriend 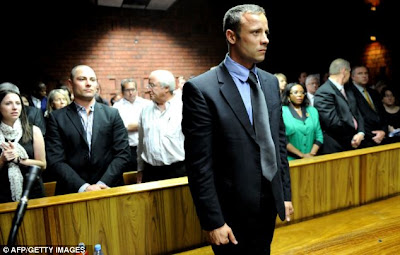 This Oscar's story really just leaves me more and more confused. I mean, how can you mistaken someone for a bugler and shoot the person several times?

Anyways, see how TrendySturvs recounted it after the cut.

Oscar Pistorius today admitted shooting dead his model girlfriend but claimed he had only opened fire because he mistook her for a burglar in the middle of the night.

The athlete dubbed Blade Runner said he had been on the balcony of his house when he heard noises from the bathroom. Believing Reeva Steenkamp was asleep, he grabbed his handgun and shouted a warning before firing four shots through the door, magistrate Desmond Nair was told. It was only then, Pistorius claims, that he realised Miss Steenkamp was not in bed. 'I kicked the door open,' he said. 'She was alive. I tried to help her but she died in my arms.'

Pistorius, 26, sobbed inconsolably throughout the lengthy bail hearing. At one point the magistrate postponed proceedings so the Paralympic athlete could compose himself.

Although no decision was made on bail today, Mr Nair did rule that the charge would be premeditated murder indicating Pistorius, who last year became the first double-amputee track athlete to run at the Olympics, is likely to remain behind bars until trial.

He has now been driven back to jail where he will spend a sixth night behind bars before the hearing resumes in the morning.
Posted by Yimiton at 6:01 PM