Yey! Robert Pattinson & Kristen Stewart are back together after cheating scandal 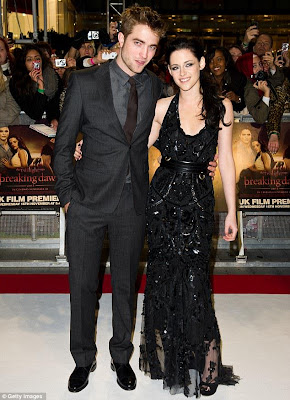 I've never been more excited to see a hollywood couple back together. I really love these 2 but my fear is will this relationship stand the test of time? Will they ever truly trust each other again? They're already moving in together again, isn't it too early for them to take such a big step just after making up?

According to mailonline, Robert Pattinson and Kristen Stewart have reportedly decided to give their romance another shot.

The Twilight co-stars are said to have had a tearful heart-to-heart, with the 26-year-old actor eventually deciding to forgive his girlfriend for what he considers to be a 'stupid mistake'.

A source told The Sun: 'They pretty much decided they couldn't live without each other.

'Kristen poured her heart out to Robert and told him it was a one-off and a mistake.'

The pair are now said to be moving into a secluded Los Angeles home together, and are hoping to rebuild their relationship.

The source added: 'Rob sees it as Kristen made a really stupid mistake. After a lot of long tearful talks, they've worked it out.

Rob can see how truly sorry Kristen is and has totally forgiven her. They really do love each other.'

Kristen seems to have been quietly confident about making amends with Rob for some time.

Earlier this month, she told reporters at a press conference the pair were 'totally fine' about making potentially awkward public appearances together in November while they promote The Twilight Saga: Breaking Dawn Part 2.
Posted by Yimiton at 8:34 PM