Protests in Jos and Katsina over ‘blasphemous video’ 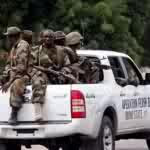 Some parts of Jos were engulfed in confusion Friday afternoon after some Muslim youths took to the streets to protest an American film said to have portrayed Prophet Mohammed in bad light.

What started as a peaceful protest by the placard carrying youths, turned to chaos and confusion when soldiers fired gun shots into the air, ostensibly to disperse the youths.

There was confusion in the city centre as traders, students, and other people ran to areas considered safe. The confusion resulted in vehicles and pedestrians running into each other, while traders, offices and banks were hurriedly shut down. The development also caused a major traffic snarl, with unconfirmed rumours that violence had erupted in some areas.

NAN, however, observed that more security men were deployed to sensitive areas, especially churches around the city centre.

Also heavily guarded were eating joints, the PHCN offices and banks.
Capt. Salisu Mustapha, Media Officer of the Special Task Force (STF), who spoke on the development, wondered why the confusion erupted as the protests were supposed to be peaceful. "We met with the Muslims leaders and urged them not to allow the protests to take place in view of the security situation. "This afternoon, they started what we felt was peaceful, but I am hearing something different. In fact, I am rushing to the area to see things for myself, but my colleagues are already there. "But generally, I think there is no casualty. Troops have been stationed there and are merely shooting in the air to scare away the youths, but nothing ugly happened," he said. Mr. Mustapha said he was particularly surprised at the protests because he worshipped at the Jos Central Mosque, where the preachers cautioned against any protest. "I think most of the protesters must be people that did not even go to the Mosque; people whose main concern is to cause confusion and make trouble,'' he said.

In Katsina, hundreds of Muslims also on Friday staged a peaceful demonstration to express their anger over the  alleged blasphemous video of the Holy Prophet.

The demonstrators started their protest at Sabon Layi Area of the metropolis at 9.30 a.m. and moved peacefully through Gwangwan Area to Kangiwa Square. The demonstrators were seen carrying placards with assorted inscriptions such as 'Death to Amerians', May Allah Almighty punish whoever tarnished the image of our Prophet' and 'To hell with the attackers of Islam' among others. During the demonstration, which lasted for over two hours, many Muslims in procession were seen chanting various slogans condemning the U.S. for their act, while others were only reciting verses of the Holy Quran. They insisted that the allegedly blasphemous video was a plot by the U.S. to ridicule Islam and its Prophet.