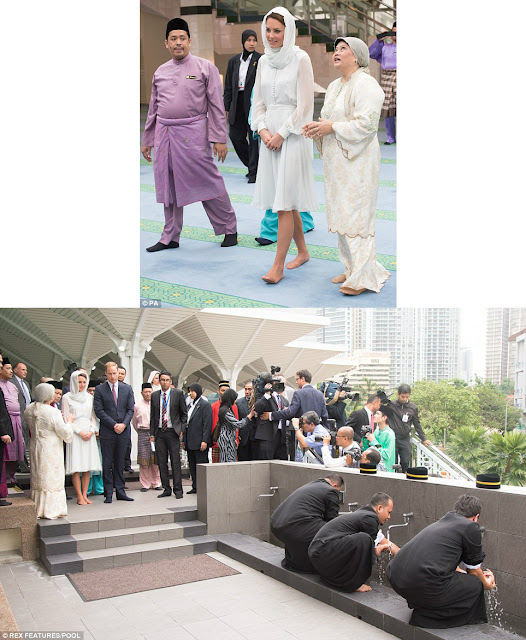 I'm so loving Princess Katherine right now. She looks so angelic and innocent. She radiates beauty and inner contentment and that her smile is priceless.

Even at the midst of the stupid 'topless' photo controversy  published by a French magazine, she still manages to look happy and reassuring. I'm definitely making her my number one girl for 2012.

This was at a royal visit to Assyakirin Mosque, the biggest in Malaysia which can host 12,000 for Friday prayers.

Kate made her way around, smiling and saying 'it's very nice to meet you' with each member of staff in the greeting lineup while William was overheard asking 'So is this where everyone gathers? When is your biggest service? How many people gather here?' When he was told as up to 12,000 on Fridays, he exclaimed: 'Wow, So many!'

Kate spent most of her time talking marveling at the mosque and could be heard saying, 'It's so peaceful in here,'

They spoke for a good five or six minutes, starting on the subject of the architecture and calligraphy in the main prayer room. 'It's really amazing,' Kate said.
Posted by Yimiton at 1:57 PM