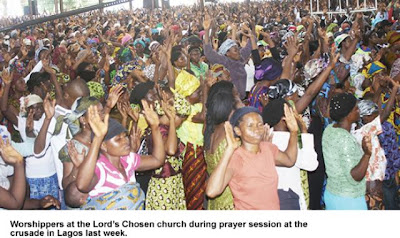 A 23-year-old man, Obinna Maxwell, is in the custody of Lagos State police following a confession in church that he killed his friend.

Maxwell was arrested by the police last month after his confession to a large congregation of the Lord's Chosen Church at Ijesha, Lagos, that he killed his friend, Elijah.

He said that he stuffed Elijah's corpse in a 'Ghana-must-go' bag and dumped the corpse by a dump site at Orile-Iganmu.

Maxwell said that he mistakenly killed the deceased following an fight they had over a debt of N50,000.

"I collected N50,000 from Elijah sometime, but he came to my house at Orile for his money but I told him I had only N20,000 to give him. He refused to collect it and held my shirt. We started arguing and fighting, so he tried to grab a stool to hit me but I reached out for the stool before him and hit it on his head," he said.

"He collapsed and was unconscious. I tried to revive him but he was dead."

Sensing that Elijah was dead, Maxwell said he hurriedly stuffed his corpse into a bag and dumped him by a dump site.

Maxwell said that he was, however, caught and accosted by a man who noticed the blood dripping from the bag.

"When I saw that the man has caught me, I told him what happened, so that was how he decided to blackmail me. He demanded for N8,000, but I gave him N3,000. He later demanded for N50,000 and started coming to my house to take whatever he wants," he said.

"I had to sell my TV set and home theatre for N35,000 and I gave him the money. I was troubled about the death, so I told a pastor and he said I should confess at the Lord Chosen Church."

Maxwell said that his arrest came shortly after he gave the confession in church.

"I guess a member of the church who heard my confession told Elijah's family and they reported to the police," he said.

Ngozi Braide, State police command spokesperson, who confirmed the incident, added that Maxwell would soon be charged to court.