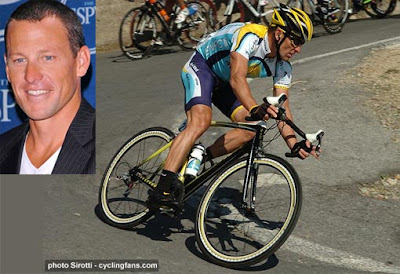 American anti-doping officials have stripped Lance Armstrong of his seven Tour de France titles and imposed a lifelong ban from cycling, the sport that made him an American hero and a sports icon, it was revealed on Thursday.

The announcement from the US Anti-Doping Agency effectively destroys his legacy as one of the greatest cyclists in history and rubs a black smudge on a story that inspired millions of fans, drawn to his story of returning to glory after recovering from horrific cancer.

The USADA acted within an hour of Armstrong's announcement that he would stop fighting charges that he used blood doping to illegitimately enhance his performance. Despite the action, Armstrong maintains his innocence and called the USADA's case a 'witch hunt.'

40-year-old Armstrong, who retired a year ago, is now officially a drug cheat in the eyes of his nation's doping agency. USADA chief executive Travis Tygart said earlier that the agency has the authority to remove the titles from the 40-year-old athlete -- and would act promptly to do so. 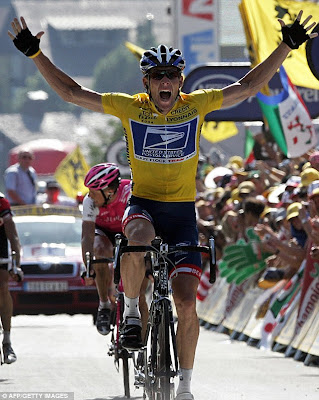 Armstrong argued that only the International Cycling Union, which oversees the Tour de France, has that power. 'USADA cannot assert control of a professional international sport and attempt to strip my seven Tour de France titles,' he said in a statement. 'I know who won those seven Tours, my teammates know who won those seven Tours, and everyone I competed against knows who won those seven Tours
USADA maintains that Armstrong has used banned substances as far back as 1996, including the blood-booster EPO and steroids as well as blood transfusions -- all to boost his performance. 'It is a sad day for all of us who love sport and athletes,' Mr Tygart said. 'It's a heartbreaking example of win at all costs overtaking the fair and safe option. There's no success in cheating to win.' Armstrong declined to enter arbitration -- his last option -- because he said he was weary of fighting accusations that have dogged him for years. He has consistently pointed to the hundreds of drug tests that he has passed as proof he was clean.

'There comes a point in every man's life when he has to say, "Enough is enough." For me, that time is now,' Armstrong said in a statement sent to The Associated Press. He called the USADA investigation an 'unconstitutional witch hunt.' 'I have been dealing with claims that I cheated and had an unfair advantage in winning my seven Tours since 1999,' he said. 'The toll this has taken on my family and my work for our foundation and on me leads me to where I am today -- finished with this nonsense.'

Armstrong's disgrace on Thursday marks the dizzying fall of an athlete who was regarded as a hero by millions because of his remarkable recovery from testicular cancer.
Posted by Yimiton at 8:51 AM