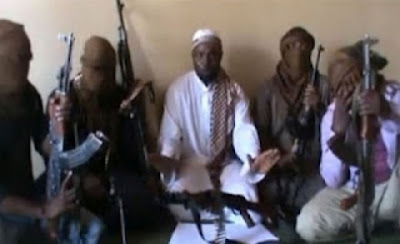 The Yobe state commissioner of police Patrick Egbuniwe  said the JTF on patrol around the estates suspected a hide out of the Boko Haram and in efforts to get close to the site witnessed a severe resistance leading to exchange of gun fire which in turn detonated several explosive devices in the hideout. He said three of the suspects were killed while a woman was arrested in the hideout.

He also disclosed that one AK47 rifle and several round of ammunitions were recovered in the hide out.

The recent attack is happening just two days after the visit of the National Security Adviser, Sambo Dasuki to Yobe and Borno states.
Posted by Yimiton at 8:14 AM