Kristen & Robert fight over who gets custody of their rescue dog, Bear

But Kristen won’t give up Bear easily, she nursed the pup through his battle with the potentially fatal disease Parvo.
She's also spent a lot of time with the dog and has flown him around the country with her.

'After Rob moved his things out of their Los Angeles apartment, he then told Kristen he wanted Bear,' an insider told RadarOnline.com.

'But Rob was so hurt by Kristen’s actions he decided that he wants the dog to help him get over what happened. After all, a dog is a man’s best friend and Bear is such a good companion.'She was heartbroken – they adopted Bear together and she always felt that he was their little baby. 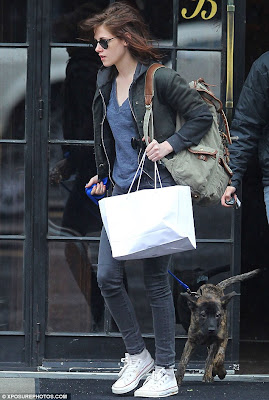 'However, Kristen won’t give up Bear in a hurry. She helped Rob save Bear from Parvo disease, which nearly took its life when it was a puppy.
'She wants joint custody – and it could get a little messy,' the source revealed.
According to the mole, the couple were planning to get another dog just before the revelation of Kristen's fling broke.
'Robert and Kristen were looking into the possibility of adopting another dog. They were desperate for a play pal for Bear and scoured petfinder.com, as well as a few high-kill shelters in Los Angeles. But it seems that’s out of the question now,' the insider said.