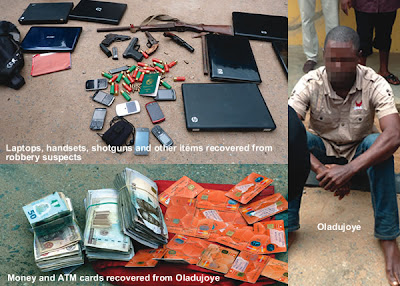 Oh my! What a flimsy explanation. Thank God for the vigilant security guard who raised alarm and got the man arrested. I still wonder how he actually got those cards though.

The full story as reported in Punch

The Lagos State Police Command has arrested Dare Oladujoye, a driver with Zenith Bank, for allegedly being in possession of 19 Guaranty Trust Bank ATM cards and the sum of N652, 000.
PUNCH Metro learnt that the suspect was using the cards to withdraw money from an ATM at Ogba branch of GTB when a security guard raised the alarm.

The Commissioner of Police for the state police command, Mr. Umar Manko, said as of the time of his arrest, the suspect had withdrawn N652, 000 from the ATM.

Manko said, “On July 26, 2012, around 8:30pm, there was a distress call that there was commotion at GTB, Ogba branch. On getting there, the suspect was seen with 19 ATM cards.

“He is an employee of Zenith Bank and we wondered what he was doing with the 19 cards. He was arrested and as of the time of his arrest, he had cashed N652, 000. The matter is under investigation.”
The suspect however denied stealing the ATM cards. He said whenever he lent people money, he would collect their ATM cards as collateral and return them after payment.
He said, “I usually loan people money and I’ve been doing it for over a year. Whenever I loan people money, I will collect their ATM cards and their Personal Identification Numbers. When they repay me, I return their cards to them.
“However, if they don’t pay me back in cash, I go to withdraw money from their accounts through the ATM.”
When quizzed on where he got the money which he lent people, he said he was into various kinds of businesses.
He also said he had friends in the banking sector who helped him with funds.
He said, “I am a very hard working person. I joined Zenith Bank as a driver over three years ago and in less than a year, I bought a tricycle which I leased to another driver that gives me returns on a regular basis.
“The following year, I bought two tricycles bringing the total number to three. I make N150,000 monthly from the tricycles and N60,000 from my salary. I also get credit facilities through my connections in the banking sector.
“On the day I was arrested, I went to withdraw money on Thursday night with some of the cards when a security guard raised the alarm. I did not steal those cards. I know the owners of the cards and I have their numbers on my phone.”
Posted by Yimiton at 9:11 AM