Remember that story I wrote; about  Kim K's ex husband Kris Humphries' ex-girlfriend Myla Sinanaj is pregnant with his child! the babe has come out to refute the rumour.

According to Dailymailonline, "Myla Sinanaj has finally set the record straight - insisting she is definitely not pregnant with Kris Humphries' child. 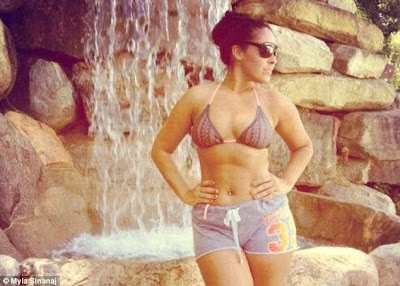 The revelation comes a day after the 25-year-old posted a Twitter snap baring her stomach, casting doubt on the reports by writing: 'Uhhh ooooo Loook No baby bump!'.

When asked by today while out in Jersey, Myla told TMZ: 'I am definitely not pregnant.'


But the website claims she put the story out there in the first place, by telling her lawyer she was pregnant last week.
Her latest defence is that because she is curvy, people started talking and 'me not being a size zero kept it going'.
Yesterday she explained on Twitter: 'Shocker‬ yes I'm a thick curvy girl All natural I'm comfortable in my skin.'
Since posting the snap, Myla continued with a stream of posts on her Twitter page.
And said she was thinking about making a video that would clear the whole matter up - although one is yet to emerge.
'I'm getting everyone's tweets and I know u guys are 100% right I'm going to clear things,' Myla wrote on her Twitter page.
'Up out of MY mouth for the 1st time not 'sources'.

'This is something I should have done a long time ago but I thought keeping quiet & ignoring was best but enough is enough,' she continued in yest another tweet.

And finally: 'I'm doing a Video right NOW that I will Post with the TRUTH out of MY mouth and kill all these 'sources' storys 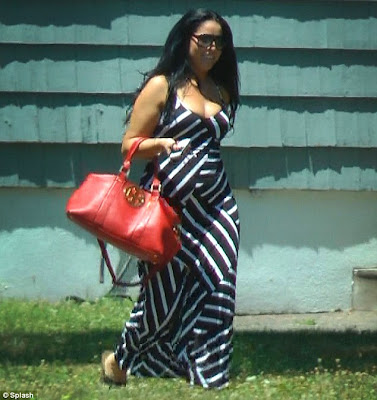 On Friday Myla Sinanaj stepped out showing off what appeared to be a baby bump on her way to meet friends at Five Guys burger joint.

The brunette sported a black and white striped maxi dress which clung to her visibly rounded belly.
Rumour, Myla is believed to have dated NBA star Kris following his split from wife of 72 days Kim Kardashian"