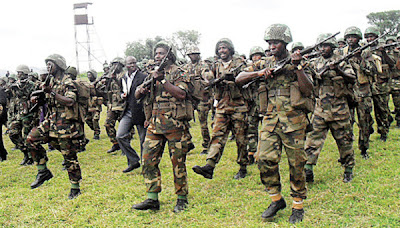 Na waoh, we've got our own issues in our country and we're sending out soldiers to fight in other countries.
According to PUNCH Nigeria:
Indications emerged on Sunday that Nigeria will soon deploy soldiers in Mali to confront the Islamists troubling the West African country, the Presidency and foreign affairs ministry said on Sunday.
Spokespersons for President Goodluck Jonatha, Reuben Abati; and Foreign Affairs Ministry, Ogbole Ahmedu-Ode, say Nigeria holds a responsibility to return peace to Mali.


“Nigeria is committed to resolving the crisis in Mali especially as President Jonathan is a co-mediator in the crisis,” Abati told The PUNCH on Sunday, while Ogbole-Ode said it was mandatory for the country to salvage the situation in Mali where Islamic fundamentalists are unleashing attacks on the country’s monuments and people.
The Presidency’s confirmation came on the heels of Ivorien President Alassane Ouattara’s announcement that member state of Economic Community of West Africa would soon send deploy troops in Mali if the situation in the country did not improve rapidly.
Ouattara said this in interview with French weekly, Le Journal du Dimanche. The interview conducted in French and published on Sunday was translated by The PUNCH via Google translator.
The Ivorien President, who is also the incumbent chairman of ECOWAS, said,  “If the (Malian) situation does not evolve positively and quickly, yes, there will be a military intervention in Mali. It seems to me inevitable. “The chiefs of staff of West Africa met in Abidjan this week. All member states of ECOWAS were represented. It shows that the Joint Chiefs of Staff Officers propose the establishment of a contingent of nearly 3,300 men. Initially, it will deploy gendarmes and police. Then, the military.
“My chief of staff said this week rightly that the situation in Mali is deteriorating a little more each day and not only in the north but also south. We plan to establish an African peacekeeping force made up half of Malian soldiers, half of soldiers from Niger, Nigeria, perhaps in Chad and other countries.”
On the urgency of the deployment, Ouattara said, “I think we can talk in weeks, not months. There is urgency. Northern Mali is a land of moderate Islam. Not Malians who violate human rights, force women to wear the burqah and abuse them, who destroy historical monuments, preventing young people from listening to music . I am told that these men come from Yemen, Afghanistan, Pakistan … They are extremists, terrorists who must return to where they came from.”
Abati said, “The ECOWAS leaders have the responsibility to ensure peace in Mali and the sub-region. Nigeria is committed to resolving the crisis in Mali especially as President Jonathan is a co-mediator in the crisis.
“This country has a brilliant record of participation in peace missions: Sierra Leone, Liberia and so on. Nigeria is fully committed to regional peace.”
Speaking in the same vein, Ogbole-Ode said Nigeria, as “a responsible member of the international community, was bound by agreements it entered into.”
But the opposition argued on Sunday that it was not ideal for the Federal Government to send soldiers to Mali to fight for peace at a time that Nigeria was in the thick of an insurgency.
Attacks by the violent Islamic sect, Boko Haram, since last year have claimed at least 3,000 lives.
The All Nigeria Peoples Party said that although there was nothing wrong if Nigeria sent soldiers to Mali, the present security situation at home did not warrant it.
Speaking in a telephone interview with our correspondent, the National Publicity Secretary of the party, Chief Emma Eneukwu, said there was no need for Nigeria to abandon its problems while trying to solve that of other countries.
He said, “The present problem facing the country requires the attention of members of our armed forces. Our security is zero.
“Let us sit down and face our own problems first before handling that of others for them. We are at danger here already. Let us prevail on the government not to send our soldiers to a foreign land when they have work to do here.”
Also, the National Chairman of the Action Congress of Nigeria, Chief Bisi Akande, cautioned the Federal Government over the plan to deploy troops in Mali.
Akande, who spoke through his media aide, Mr Lani Baderinwa, on Sunday, charged the Federal Government to ensure the safety of lives and property in the country before venturing out to Mali.
“Charity begins at home. We must not be like the proverbial ostrich that buries her head in the sand while her rump is out in the open,” the ACN chairman said.
He wondered why the government contemplated deploying troops in Mali when Africa was not the centre-point of the nation’s foreign policy.
“It is ironic that the government would contemplate sending troops abroad when our security agencies are finding it extremely difficult to combat the security challenges in the country,” he stressed.