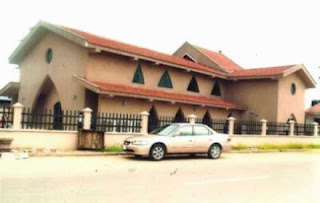 I learnt yesterday night of the death of Domenico Gitto, the Italian national who made waves in Nigeria earlier this year by controversially donating a church to President Goodluck Jonathan's hometown of Otuoke, in Bayelsa, State.

A firestorm of criticism raged throughout the country, led by those who thought the donation had ulterior political motives and that in accepting it Mr. Jonathan compromised his oath of office.

At the commissioning of the church, Mr. Jonathan explained in passing that he had merely mentioned the deteriorating state of the church to Mr. Gitto, and that he did not suggest the giant structure that was built.

The circumstances of the passing of Mr. Gitto, who owned Gitto Construzioni Generali Nigeria Limited, are yet unknown.

In a report, PREMIUM TIMES said he died of depression and had "been troubled for sometime owing to the huge debt piled up by his company in Nigerian banks."

The report said he owed Union Bank N10billion and Diamond Bank N6billion.  "A third bank, FCMB, had written to the Federal Ministry of Works asking that all money to be paid Gitto by the ministry be paid to the bank, over a N5billion debt owed it," it said.

Gitto Construzioni is currently handling many road and housing projects for the federal government, and it is unknown how they may be affected by the passing of its owner.
Posted by Yimiton at 6:56 AM