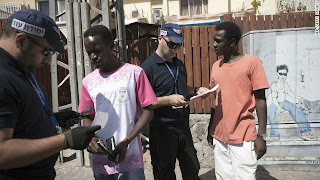 Israeli authorities said Tuesday they detained 240 illegal migrants as part of a controversial plan to deport some of the thousands of Africans who have flooded the country illegally in recent years.


Another 300 illegal migrants volunteered Tuesday to return to their country of origin, Israel's immigration ministry said. All the migrants detained Tuesday are Sudanese.
"We are sending the infiltrators, migrants, back to their homes like all countries in the West, in Europe, in the USA act when dealing with migrants," Interior Minister Eli Yishai said on Tuesday.
"Israel is acting according to international law and international charters dealing with infiltrators and migrants that come into the country against the law," he said. "We are acting according to the same law as the United States and Europe."
The issue of illegal African migrants has been of growing concern in the country in recent months. According to government records, more than 59,000 illegal African immigrants have entered the country in recent years through its southern border with Egypt.

More than 2,000 new migrants have been reported over the past month.
Some residents of southern Tel Aviv neighborhoods, where there is a large concentration of Africans, have blamed their new neighbors for increasing crime and suffocating the infrastructure and public services. Some also complain the illegal immigration is changing the fabric of Israel.
Several hundred Sudanese immigrants rallied Sunday in Tel Aviv, demanding refugee status.
Last week, an Israeli court approved a government plan to deport 1,500 African migrants. Many Israeli refugee agencies and officials are pushing against those plans and calling on the government to allow the immigrants to stay.
Yishai said Israel is treating the detained migrants "with honor" but must return them to their country of origin.
"We are dealing with a porous southern border opposite Africa," he said. "We have to close it, and we are closing it, and everyone who comes looking for work must be returned to their country and we are doing it in an honorable way. There is a grant to help the person in the first period that he returns to his country and his home."
Most of the immigrants come from Eritrea, Sudan and South Sudan. Some of them have refugee status and hold temporary permits to remain in the country, but Israel does not recognize the status of most of them and says it is looking for ways to send them back to their home countries.

Culled from CNN
Posted by Yimiton at 5:23 PM