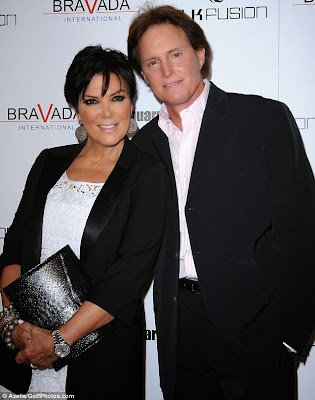 'But we will always have much love and respect for each other. Even though we are separated, we will always remain best friends and, as always, our family will remain our number one priority.'

Us Weekly report that the couple kept the separation a secret for an entire year and are not divorcing because they have no prenuptial agreement in place.

In the wake of the split, Kris' daughter Khloe Kardashian was seen stepping out for the first time with her husband Lamar Odom in apparent bid to rally around Kris, claim TMZ.

Indeed, there was mounting speculation that Kris and Bruce's relationship was over since last year.

Kris, 57, previously brushed off rumours they had split after her husband moved out of their family home in Calabasas, California, and into his own beach house in Malibu.

She said: 'We just laugh it off. We love each other and just laugh about it...These kind of stories have been circulating for the last couple of years.'
With the couple split for an entire year, scenes for the famous family's hit reality show Keeping Up With The Kardashians were portrayed otherwise.

The duo came across as happily married, and footage of Bruce moving into his 'man cave' in Malibu were depicted very differently.

According to the show, the father-of-six wanted to have some more 'space', especially after Kim and her partner Kanye West moved in following the arrival of their daughter North West.
Posted by Yimiton at 10:00 AM