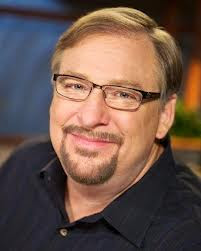 In an emotional letter to his church members, Pastor Rick Warren of Lake Forest, Calif.-based Saddleback Church told them that his youngest son committed suicide. “At 27 years of age, Matthew was an incredibly kind, gentle and compassionate young man whose sweet spirit was encouragement and comfort to many,” Warren, the popular author of The Purpose Driven Life, said in the letter.

Matthew Warren, the youngest of three children of Rick Warren and his wife, Kay, killed himself Friday, the evangelical pastor said in the letter.

“No words can express the anguished grief we feel right now,” Warren wrote. “He had a brilliant intellect and a gift for sensing who was most in pain or most uncomfortable in a room. He’d then make a bee-line to that person to engage and encourage them."

“In spite of America’s best doctors, meds, counselors, and prayers for healing, the torture of mental illness never subsided. Today, after a fun evening together with Kay and me, in a momentary wave of despair at his home, he took his life.”

NBC News reported that Warren was found dead of an apparent gunshot wound around 10 a.m. Friday in his home in Mission Viejo, Calif., according to supervising deputy Dan Aikin of the Orange County Sheriff-Coroner’s Department.

Warren wrote that he and his wife "marveled at his courage" to fight "relentless pain."

"I'll never forget how, many years ago, after another approach had failed to give relief, Matthew said, 'Dad, I know I'm going to heaven. Why can't I just die and end this pain?' but he kept going for another decade."
Warren thanked church members and supporters for their "love and prayers," telling them "we love you back."
Posted by Yimiton at 10:24 AM