Alamieyeseigha Can Contest For Election In 2015 — Presidency

Na wao, read up and let us know what you think 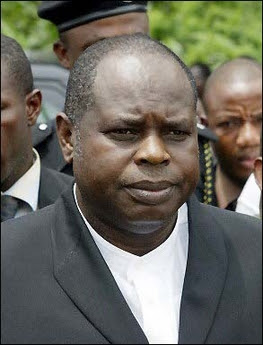 The presidency, on Thursday, said following the granting of presidential pardon to former Chief Diepreye Alamieyeseigha by President Goodluck Jonathan, the former Bayelsa State governor can contest for election in 2015 if he so desires.
The Senior Special Assistant (SSA) to the President on Public Affairs, Dr Doyin Okupe, who stated this during a press conference in Abuja, said rights and privileges of Alamieyeseigha had been restored with the pardon, adding that he could now pursue any calling of his choice.


“If a man is granted presidential pardon, all his rights and privileges are returned to him. He can sell groundnut, he can do business, he can go into politics, he can go abroad, he can do whatever he likes,” he said.

Okupe recalled that the former governor was jailed in 2006 and going by the provision of the Nigerian constitution, he would have been able to contest for any post 10 years after serving his jail term, even without
the pardon.

“Whether President Jonathan grants him pardon or not, by 2015, he will be fully qualified and eligible to run for election in 2016. I mean, if it is done now, what difference does it make? People are talking to me about timing. This is something that in the next two or three years will really expire and he will be a free man,” Okupe said.
The presidential aide said Section 175 of the 1999 Constitution empowered the president, in consultation with the Council of State, to grant presidential pardon to whosoever he chose, as he urged members of the civil societies to be reasonable on the issue.

Okupe recalled that Alamieyeseigha was removed from office in a manner that was suggested by many as not being above board, saying “nevertheless, the former Bayelsa governor, whose pardon appears to be drawing all the flaks, has been tried, found guilty and adequately punished.”
Posted by Yimiton at 10:28 PM