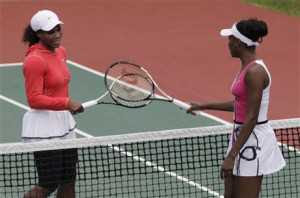 Olympic champion and the elder of the Williams sisters, Venus Williams, on Friday defeated her younger sister and world number two, Serena Williams, 6-4, 7-5 in their latest exhibition game in Nigeria.

The exhibition match was witnessed by loads of fans at the main bowl of the Lagos Tennis Club.

The match had no dull moment as the sisters were full of joy and dances during the break sessions of the match.

One of such high points was the thrilling dance steps produced by Venus as she danced to D'banj's Oliver Twist track.

Venus defeated her sister to win the thrilling encounter much to the delight of spectators in court side.

Reacting to her victory, Venus noted that with her victory in Lagos, 2013 will be a great year for her.

The game was the 24th meeting between the sisters was seen by the fans who saw them live and it sure meant more than just an exhibition match.
Posted by Yimiton at 11:08 PM