Woman storms a wedding ceremony and demands it must be stopped until d couple pay for their rented gown! 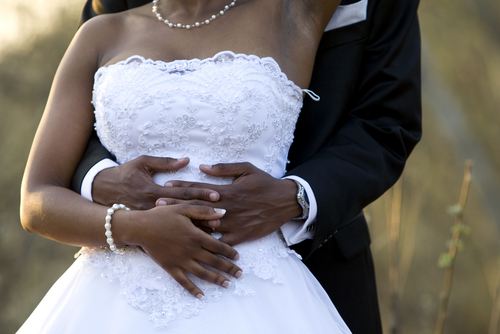 Only in Lagos! People want to have great day on their wedding day but it looks like this woman, Augustine Aiyemimelo had a nightmare instead when a Lagos-based fashion designer, Theresa Iyamu, 36, disrupted her church wedding and reception of a couple.

Theresa stormed the church on the day of the wedding, demanding that the marriage be put on hold because the couple was owing her an undisclosed amount of money on the wedding gown they rented from her.


But before the fashion designer could succeed in scuttling the wedding ceremony, church securitymen and policemen bundled her out of the church.

Not satisfied, Theresa also went after the couple at the Federal Civil Service Club hall where the wedding reception held, threatening to disrupt the reception. She was overpowered and handed over to the police.

Neighbours wondered why Theresa was after the couple since they are from the same area in Edo State, Southsouth Nigeria.

Armed robbers stormed the residence of the couple in the night of the wedding and carted away valuables including cash, jewellery, wedding ring, camera and others worth N980,000.

Because of what had earlier happened, Theresa became the prime suspect. She was arrested by the police at Satellite town division.

She was later arraigned at the Apapa Magistrates’ Court charged with attempt to disrupt Mr. and Mrs. Aiyenimelo’s wedding and reception.

When the charge was read to her, she pleaded not guilty and the presiding magistrate, Mr. A. K. Shonubi, admitted her to bail in the sum of N400,000 with two sureties each in like sum.

Dear readers, is this mean or what?
Posted by Yimiton at 6:22 PM