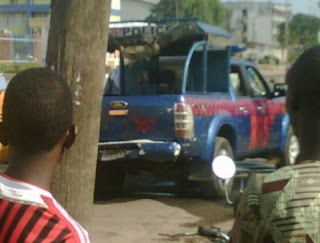 I witnessed the shootings in Sururlere yesterday personally, this one is not that someone told me or 'it was reported'.

I had been at my fiance's place and he drove me home to pick something up from my apartment before we head out again; but immediately we entered my estate gate, we heard very loud gun shots. People were running helter-skelter and shouting at the gate keeper to lock the gate. It was obvious that it was a gun battle.

Of course, we quickly parked the car and rushed upstairs. But trust the blogger in me (lol), I came outside and was looking from the veranda, trying to see who was shooting who. Unfortunately, I could only hear oh, I couldn't see.

After the gunshots had subsided, I crept out to ask what had happened and was told that it was a gun battle between dare devil armed robbers and the police. This was at 2pm, with the scorching sun. I mean, these guys no dey fear again at all.

While I was still marveling at how bold they were, my colleague told me this morning that armed robbers visited a fellow colleague in Ogba and dispossessed him of his possession and the last is this report from BusinessDayonline  that armed robbers raided a bureau de change yesterday, killed 9 people, including 2 police men, a 6 year old girl and her grandmother. The armed robbers still made away with the money!

I don't know if this has anything to do with the 'Ember' months, but I know we must all be very careful.
Posted by Yimiton at 12:51 PM