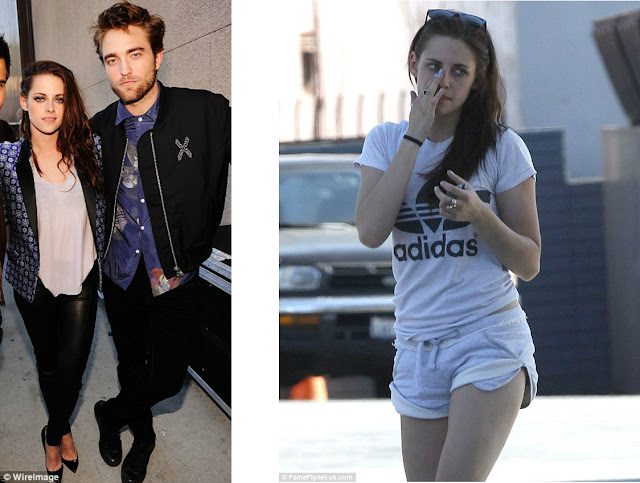 According to Mailonline 'Robert Pattison is reported to have packed his bags and left the LA mansion he shared with girlfriend Kristen Stewart following the news she cheated on him with married director Rupert Sanders.

But despite Kristen’s very public apology regarding her ‘momentary indiscretion,’ Robert Pattinson is reported to be in two minds about giving his Twilight co-star a second chance.

A source close to the star told The UK Mirror: ‘Rob is devastated and deeply hurt. They spoke on the phone and he said “You’ve completely humiliated me.”
‘All the trust has gone.’
The source said that the 26-year-old British actor 'couldn't believe what he was hearing’ when Kristen told him the fling was just a ‘one off.’'

I've felt so much pity for 22 year old Kristen Stewart in regards to her affair with 41 year old Director of Snow White and the Hundsman,  Rupert  Sanders, that I've been so reluctant to blog about it. Nevertheless when her boyfriend, Robert lashed out on her and said how completely humiliated he felt, I pitied her a little more and felt terrible for him and every other person in the mess.


She has cried, she has apologized, she has come out in public to offer an apology and I keep wondering what pushed her to do this in the first place. Was it just a one off or have they been having this affair for a long time before they were caught?

Meanwhile, how could she be so mean as to have taken her partner-in-crime' children out for an ice cream barely 3 months ago? Has Vampire demons infested her, how could she have kept it so wrapped up in the teens award without anybody suspecting anything? Inasmuch as I feel bad for her, I feel worse for the man's family.

what hurts me even more is that Rupert's wife Liberty Ross liked her and starred  as her mother in the movie!

My annoyance though goes with Rupert, what the heck was he thinking! a married man having an affair with a mere girl of 22 in his movie! Does he have any regard for his wife at all? Does he have any respect for his family? Inasmuch as we all blame Kristen for this stupid act, I think Rupert should be made to answer for his stupidity too.

My question now is will this affect her career? Is she bound to 'fall in love' and have affairs in all or almost all movie set? Will Rupert's wife forgive him and move on? What about Robert Pattison, will he ever trust her again? will he ever forgive her?
Posted by Yimiton at 12:02 PM