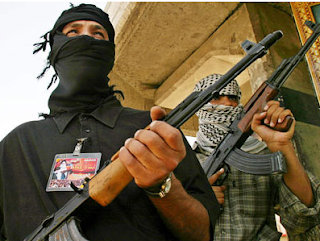 Two alleged members of the Al-Qaeda network, Babafemi Lawal and Luqman Babatunde, natives of Ogun and Lagos states, respectively, were on Thursday arraigned before an Abuja Federal High Court by the Federal Government.
Lawal and Babatunde allegedly received the sum of N1m from the  terrorist organisation, Al-Qaeda in Arabian Peninsula also known as AQAP in Yemen, to fund the recruitment and transportation of prospective Nigerian members of the terrorist group to Yemen.

The alleged action constituted an offence contrary to Section 13(a) of Terrorism (Prevention) Act 2011 and punishable under paragraph (c) of the same section of the Act.

Also, their alleged attendance of a meeting of the terrorist network, was an offence under Section 3 (c) of the Terrorism (Prevention) Act 2011.

The accused persons pleaded not guilty to the six-count charge brought against them by the Attorney General of the Federation.

The presiding judge, Justice Gladys Olotu, ordered that the accused persons be remanded in prison custody.
Parts of the charges against them read, “That you Olaniyi Babafemi Lawal, 31, of Ijebu Ode, Ogun State on or about May 2011 at Abuja, willfully received monies in Saudi Riyals and the United State of American Dollars equivalent to N1,000,000.00 from a terrorist organisation known as Al-Qaeda in Arabian Peninsula, also known as AQAP in Yemen, with intent that the said money shall be used to recruit and transport prospective members of the terrorist group to Yemen.
Posted by Yimiton at 11:01 AM