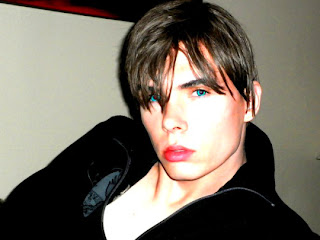 More gist and after cut


Magnotta, believed to originally be from Toronto, was renting an apartment in a working-class Montreal neighborhood. It was behind that building that police found a man's torso in a suitcase in a heap of garbage on May 29, 2012, police said. That same day, a foot was found in a package mailed to the Conservative party headquarters in Ottawa. A hand was also found at postal warehouse in the Canadian capital. The package with the hand was addressed to the Liberal Party of Canada. Early testing shows the three body parts come from the same man, police said. According to an official close to the investigation, there is video of the crime.
Police say Magnotta is also known by the names Eric Clinton Newman and Vladimir Romanov. Montreal police identified Magnotta as a suspect on May 30, 2012. They described him as white, 5 feet 8 inches tall with blue eyes and black hair.
Posted by Yimiton at 3:25 PM