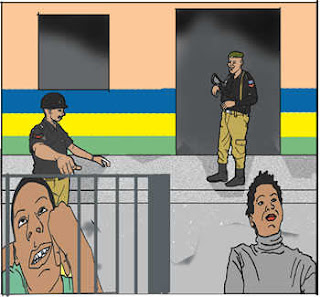 When Rukayat Job was 13, she met Jackson in her mother's beer parlour in 2009. She thought luck had smiled on her when he asked her to be his lover. For awhile, they enjoyed their relationship until tragedy suddenly struck.


Job was arrested for the murder of a man in the Oyingbo area of Lagos. The victim was allegedly shot accidentally as policemen tried to quell a fight between Jackson, then Job's ex boyfriend and some friends of her current lover, Joshua.

Now Job, 16, who is a Ghanaian by birth, is marking time at the female wing of the Kirikiri Prison for an offence she did not commit.

Culled from: The Punch
Posted by Yimiton at 6:19 AM